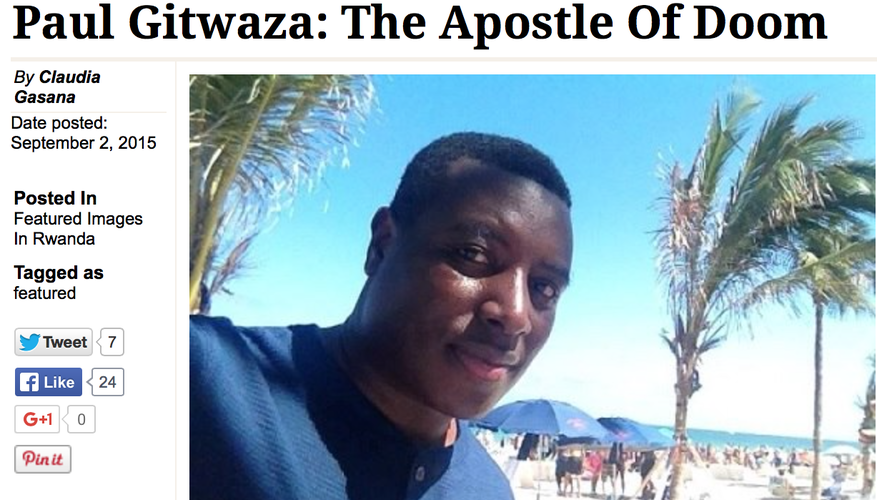 It is compelling that we immediately present this succinct statement that we received 30 minutes ago from Zion Temple Celebration Center regarding the unfounded slander and allegations against our friend, Apostle Paul Gitwaza, says Aina Torp.

The article titled “Paul Gitwaza, the Apostle of doom” written by Claudia Gasana and published on Rwanda Express on September 2nd, 2015 is misleading to the readers and the general public that will hear about that article in regard to the values and morality of Zion Temple and its leader, Apostle Dr. Paul GITWAZA. The same identical article was posted by Gahigi on News of Rwanda on the same date. It is even confusing to the general public as to who the original author is or if the article was co–authored by both and published on two online media outlets. On behalf of Zion Temple Church, this is to clarify the official stand on the allegations found in the article that we have also presented to the office of Rwanda Media Commission (RMC) for further pursuit for explanations from the author and the two online media outlets as to why such an article with false, baseless and misleading information was authored and published.

Zion Temple Celebration Centre is a church under Authentic Word Ministries which is a faith based organization that is legally registered in Rwanda. The Church is legally permitted by the government of Rwanda to serve its members on the territory of the Republic of Rwanda. Furthermore, Zion Temple Church is a member of the EVANGELICAL CHURCH ALLIANCE AND PEACE PLAN: two fora which assemble Christian congregations in Rwanda. In both fora, Apostle Dr. Paul Gitwaza serves at senior level leadership positions. In this light, our church is neither a cult nor a fraudulent group of people that thrives by manipulating Rwandans.

We aim to present the gospel as commended by our Lord Jesus Christ. We also do philanthropic and development activities as part of our divine mission, reflected in our health care center, a school, among others which pay taxes on a regular basis. The teachings we preach through radio and diverse channels of communication serve as tools of behavioral change for a better future of our country.

The integrity of Apostle Dr. Paul GITWAZA has never been put into question by any existing formal institution as per presented in the article. As a matter of fact, the church leaders in our country have decided to elect him as the leader of PEACE PLAN RWANDA at the national level.

As a Christian Church, we believe that eschatological messages should be taught and the world as we know it will have an end at one time that is not known to mankind as the Bible clearly states. Through the series of teachings that many have followed at our premises or other communications are in line with this biblical based faith. However, it seems that the article has for whatever reasons known to the authors, taken the teachings totally out of the context. We provide biblical signs and not final dates of the end of the world as it has been the case for some groups of people. For us, we believe that the world can have its end today or in more than 1000 years from now according to God’s will. Our faith is based on the Bible which encourages us to wait upon the coming soon of our Lord Jesus Christ as we live our present lives here on earth in accordance to God’s will.

The Lunar Tetrad, which is in simple words “four successive total lunar eclipses, with no partial eclipses” presented as a sign of last days can be found in the Bible (Joel 2:31, Mathew 24:19, Acts 2:20). From a scientific perspective, the National Aeronautics and Space Administration (NASA) of the United States of America has presented a report on this mysterious sign that happened between 2014 and 2015 (April 15th, 2014; October 8th, 2014; April 4th, 2015 and then September 28th, 2015). Biblically, Israel is intertwined with the end time signs. For bible believers, it is important to note that, the last Tetrade will coincide with two Jewish feasts of Passover and Tabernacle and will be the last which will fall on the Jewish feasts in the 21st century. Again, this has nothing to do with pointing out the specific date when the end will be but rather to observe and be mindful of the signs as mentioned in the Bible. For further information, we can provide copies of the series or an independent research can be carried out.

The above statement provided through this press release is the official stand of Zion Temple Celebration Center. Any other contrary view or idea should be considered as personal, taken as such and as not endorsed by our organization.