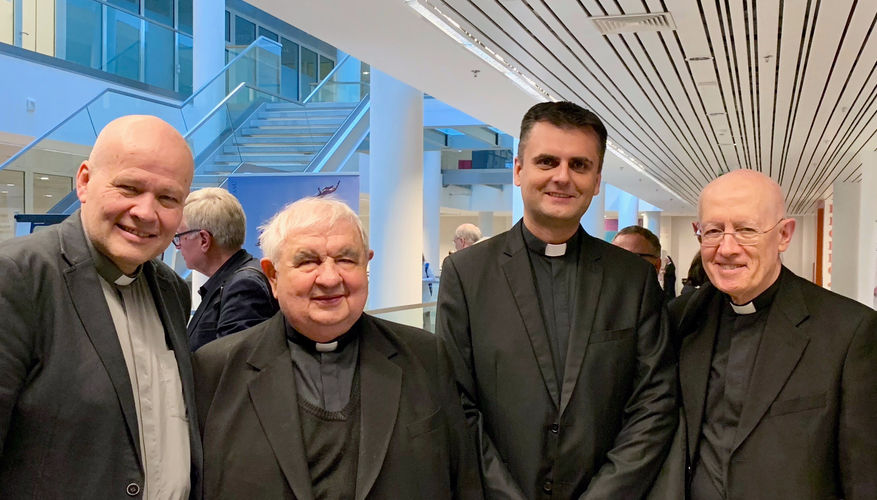 Jan-Aage Torp with other main speakers. From the left - Father Ireneusz Skubis, the Founder of the Europa Christi Movement and one of the most influential leaders in Polish Catholicism for three decades; Father Jaroslaw Krzewicki, Rector of University of Lodz with two earned PhDs in Theology and Canon Law; and Msgr. Lluis Clavell, a member of the Roman Curia in the Vatican as well as former Rector of the Pontifical University in Rome.

It was a great honor for European Apostolic Leaders (EAL) that our President, Jan-Aage Torp, was a speaker at the Congress of the Europa Christi Movement at Łódź University in Poland. He was asked to speak about «Witnesses of Faith. Looking at the Cross. Martyrdom, an Expression of Infinite Trust». Torp was the only pentecostal-protestant speaker at the Congress.

The Europa Christi Movement was born in Poland two years ago to defend the Christian roots of Europe. This movement does not have an ecclesial character but wants to unite all who are concerned about the tendencies to strip Europe from its Christian identity.

The Congress of Europa Cristi was hosted by the Higher School of Economics and Management in Łódź, together with the Senate of the Polish Republic, the University of Cardinal Wyszynski in Warsaw, and other institutions.

Professors and bishops spoke, among them Cardinal Mauro Piacenza from Rome, who is the Prelate of the Roman Catholic Church in Italy; Archbishop of Łódź Grzegorz Ryś; Professor of Theological Sciences and Bishop from Gliwice (Czech) Jan Kopiec; Msgr. Lluis Clavell, a member of the Roman Curia which is the central body through which the Pope conducts the affairs of the universal Catholic Church; Father Ireneusz Skubis, the Founder of the Europa Christi Movement and one of the most influential leaders in Polish Catholicism for three decades; as well as scientists from France, Estonia and other European countries. The supreme Polish government authorities were present. The Prime Ministers of Poland and Hungary were also among the speakers.