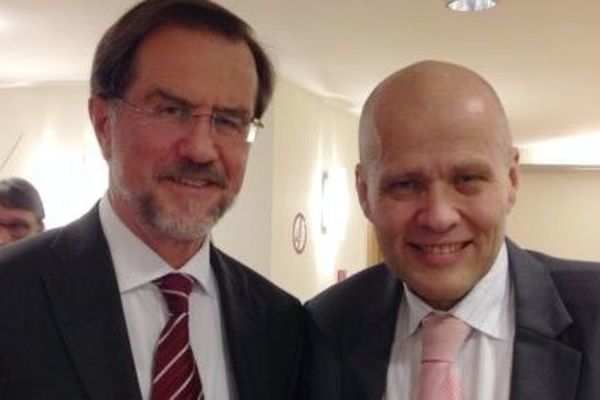 Alojz Peterle, former Prime Minister of Slovenia, and now Member of the Europeam Parliament (MEP), is the Convenor of the European Prayer Breakfast (EPB) in Brussels together with Jan-Aage Torp

150 Members of the European Parliament and various national Parliaments within Europe, altogether representing 21 nations, were gathered this week for a time of Jesus-focus together with some 200 ecclesiastical leaders. The European Prayer Breakfast was held for the 16th year in a row.

Mr. Alojz Peterle, former Prime Minister of Slovenia, and now Member of the Europeam Parliament (MEP), is the Convenor of the European Prayer Breakfast (EPB) in Brussels, and led the events, which started with a dinner with fellowship and prayer on Tuesday evening, continued Wednesday morning with the official Prayer Breakfast, and ended with a panel discussion on the significance of Jesus in politics and society.

The Tuesday Welcome Dinner in the European Commission Building Van Maerlant was marked by earnest prayer in 20 languages, spoken by Christians of various persuasions within Roman Catholic, diverse Orthodox and Protestant traditions, Evangelical and Pentecostal-Apostolic-Charismatic movements. The evening ended with a riveting accordion concert by a famous Slovenian musician, accompamied on the harmonica by the former Slovenian Prime Minister himself!

In Wednesday morning´s Prayer Breakfast, Member of the German Parliament, Mr. Johannes Selle, gave a strong testimony of the significance of prayer in everyday Parliamentary life: 30 members of the Bundestag meet every morning for prayer to Jesus for divine guidance. The French columnist and social activist, Ms. Frigide Barjot, gave a vivid testimony of how Jesus Christ had intervened in her life. Several ambassadors, MEP´s and national political leaders gave testimonies in the Prayer Breakfast which was held in the famous Spinelli Building of the European Parliament in Rue Wiertz.